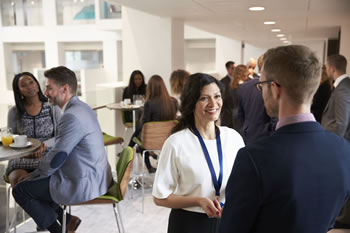 Worse yet in his mind, there was no – zero – closed business from these activities! He went with a boatload of business cards. The heavy weight business cards with clear and clean type face in black raised letters.  Each time after leaving the networking event he had twice as many cards as he gave out. More than double what Sam had and yet Sam was making connections and he had closed a handful of accounts too!

This has to be the number one mistake people make when going out to networking events.

The assumption that you will close business with people right there at the networking event the first time you are meeting them. Right! Seriously, nothing could be further than reality!

There is a saying – “People do business with people they Know, Like and Trust”.  The only way to create this feeling is by getting to know people and giving them the opportunity to get to know you.

Once this first item is understood the first question usually asked is, “okay then so what do I say if I am not pitching people on my sale to them and what I do? Which is essentially me selling to them?” This is simple yet so difficult to understand for many people.

Ask each person you meet, “How may I help you?”

Now be ready for it as they may give you the deer in the headlights look, like “What rock did you crawl out from?” Seriously though, make the offer and then listen to their issues and problems. There will certainly be something in there where you may be able to make a referral or a connection or do something to unburden them and actually help them out. Again the people you meet are not your targets to swoop in and sell right away too. Each person is an individual just like you, so offer to help them out.

Did you ever hear of the book Dig Your Well Before You’re Thirsty?

Too many people do not attain the skills necessary to network, or in fact do not even recognize the value of networking, until they have a wake up call for one reason or another that they really need to develop a network!

Sometimes it is a life event, a career change or another way to be social other than going out to clubs and bars. Networking is the fastest way to meet like minded people in a safe setting.

Here is the cautionary note – as long as you do some homework and be selective as to where you go to network and who will be there.

It is my hope you will review these three networking mistakes and see if you or someone you know might see something they are doing. It is easy if you try and take corrective actions such as those described.

Interested in joining a complementary call in November on Networking?

Sign up using the form below and the details will be emailed to you once the schedule is set.

Mitch Tublin is the CEO and Founder of Wenkroy International LLC a boutique consulting company with a main focus on Strategic Business Consulting, Training and Business Coaching. Our passion is to take people to the next level in their life and in their business.

Let’s settle this now! Or at the very least … END_OF_DOCUMENT_TOKEN_TO_BE_REPLACED

Enjoy your family and friends. Be grateful, … END_OF_DOCUMENT_TOKEN_TO_BE_REPLACED

Is your business ready to lose loyal … END_OF_DOCUMENT_TOKEN_TO_BE_REPLACED