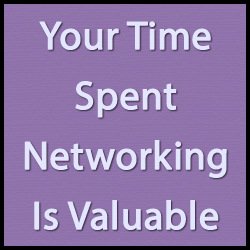 Time is one of our most valuable and not replaceable aspects of our lives. You either utilize your time constructively and with purpose or you do not. In either case once the time is passed it is gone. When you attend a networking event how do you judge if your time spent attending the networking event was a successful use of your time?

Let’s take a look at three people who spoke with me after a networking event we all attended. The event was an intentionally intimate, small gathering with 24 attendees. The meeting was for 90 minutes.  Plenty of time to have a meeting agenda and network effectively with a group this size.

The first person we will review is Peter. He is in his mid-twenties and he works for a large wealth management firm in the area. Peter basically said the networking meeting was the worst one he ever attended. He was immediately thrown off guard when everyone was asked to turn off their smart phones. He did not understand why the phones could not be silenced or placed on vibrate. Why did they have to be turned off? The next item which upset him was the obvious age difference. He was certain he was the youngest person in the room by a good fifteen years or more. Peter felt he had nothing to talk about with anyone.

The next person we will review is Lisa. Lisa is in her early forties and she works in Commercial Real Estate leasing and rentals.  She found the group to be the perfect target clients for her business so she started to pitch every single person she met with her portfolio of available office space. Lisa asked each person she met almost immediately where their office was located, how many square feet they had, what they were paying, and when their lease was up. At the end of the meeting Lisa told me she was very annoyed. This was her target client group and not one person agreed to set up an appointment to look at alternative office space with her.

The final person we will review is Barbara. Barbara is in her mid fifties. She is an attorney with a specialty in estates and trusts and works in her own practice. Barbara says she is a student of networking. At the conclusion of the event she was beaming. Four people had already set up appointments with her to meet one on one in order to discuss how they might be able to help each other. Four other people agreed to either email or call each other in order to set up an appointment to meet one on one. Barbara was ecstatic with her results! One third of the room were already going to meet with her and walking into the room she only knew one person in advance.

In summary, what do we learn from these real life reviews after a networking event?

First is to have an open mind and be yourself. Recognize that you are there to connect with people and not to utilize your smart phone and ignore the people right there next to you or across the table from you.

Second is the objective of networking is to create relationships. It is not to pitch and sell directly to the people you are first meeting. It is a turn off.

Third is to have conversations with as many people as possible and have as an objective to make appointments to meet one on one to connect with each other at another time. This will permit the relationship to build and to offer to understand how to help each other in their businesses.

Mitch Tublin is an advanced certified executive and personal coach who resides in Stamford, CT.

"The life of the nation is secure only … END_OF_DOCUMENT_TOKEN_TO_BE_REPLACED

The words ‘checking in’ may have you thinking … END_OF_DOCUMENT_TOKEN_TO_BE_REPLACED

What I’m asking is this: We all have at least one … END_OF_DOCUMENT_TOKEN_TO_BE_REPLACED