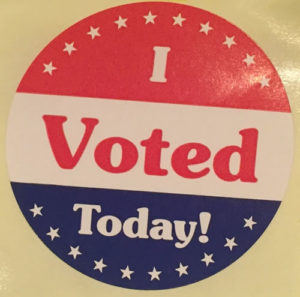 This week Tuesday was Election Day in the USA and today (Friday) is Veteran’s Day. How fitting. I do not take for granted my right to vote. On Tuesday, without knowing who would be the winner in each race on my ballot in Connecticut I voted.

It is a duty to vote.

It is part of our freedom, a freedom no one should ever take for granted. The act of voting is a tribute to all of those who have fought and continue to protect our freedom and our continued ability to cast our votes.

“…if the citizens neglect their Duty and place unprincipled people in office, the government will soon be corrupted; laws will be made, not for the public good so much as for selfish or local purposes; corrupt or incompetent people will be appointed to execute the Laws; the public revenues will be squandered on unworthy people; and the rights of the citizen will be violated or disregarded.” -Noah Webster ( edited slightly utilizing ‘people’ vs. ‘men’ )

Consider those who serve to protect each of us to preserve our freedom. Every four years their Commander In Chief is up for re-election. The person who ultimately leads them. Each election period they are permitted to cast their vote – AND – no matter who wins the election – this person is their Commander In Chief for the next four years – PERIOD.

The astounding fact is – and remember during a Presidential Election there is a higher turnout of voters than in other election years – approximately 50 to 55% of the voting eligible population goes out and votes! This translates to approximately 45 to 50% who do not vote!

Consider Veteran’s Day folks – a day to remember and thank all who have served and continue to serve. Yes, thank each of them for their service. Say a prayer for those in areas of danger and for all of their families. Think about the fact that none of the people who have chosen to serve are for war – they are for freedom and everything that comes with securing our freedom.

The right to speak your mind may be the one which we hear about the most. How did going out to vote become minimized? If there is one thing each person is able to do it is to work together to make going out to vote as important to everyone as our freedom of speech.

We want to have leaders who will respect and uphold the Constitution and everything it represents which the founding fathers fought bravely to craft and pass on to all of us. Understand the choices on your ballot in your geographical region and go out and vote.

This great opportunity is typically a one time of year activity. It is our duty to vote.

Mitch Tublin runs a specialized consulting company where coaching, training and speaking services are available for companies and individuals.

Let’s settle this now! Or at the very least … END_OF_DOCUMENT_TOKEN_TO_BE_REPLACED

Enjoy your family and friends. Be grateful, … END_OF_DOCUMENT_TOKEN_TO_BE_REPLACED

Is your business ready to lose loyal … END_OF_DOCUMENT_TOKEN_TO_BE_REPLACED