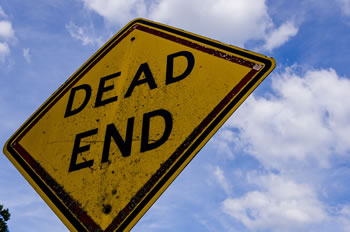 It’s a Dead End! Your cell phone has no power left. The party you left ended late at night. You were pretty sure you made the right turn to head back to the main road. The area you are driving in might be in Northern New Jersey, on Long Island, a suburb of L.A. or San Diego or outside of Chicago or Houston.

Every turn you make goes into another cul-de-sac and another Dead End!

“How will I ever find my way out of this maze!” you are thinking or screaming out.

Is this how you feel about your business?

Is this how you feel about your career?

Unless you enjoy banging your head against a wall every day – this is no way to operate.

A failure should not ever be thought of as a dead end. In his book  The Lean Startup: How Today’s Entrepreneurs Use Continuous Innovation to Create Radically Successful Businesses Eric Ries writes about the importance of testing, failing fast, reworking, testing and failing fast. There is much more to the concept in Eric’s book.

Everything leads to another thing. Yes, of course if you are driving in a car and you need to get from point “A” to point “B” within the constraints of paved roads it is a slightly different situation. The process he describes in The Lean StartUp is to move rapidly through this process in order to innovate and create change by learning – reworking – testing quickly. Not to get stuck in the mud nitpicking why everyone is at a Dead End.

The concept described is meant for entrepreneurs. Typically an entrepreneur is able to institute this type of thinking into reality as they tend not to be held back by either “well this is how we always did it” thinking or certain measurement methods which would place a hard stop on a project after a few failures. A number of larger companies are recognizing the value of this process. Under the guidance of an outside consultant company facilitator groups are being set up in an autonomous arrangement with an agenda to improve the speed and certainty of innovation within the company.

One of the most difficult aspects to overcome is the mindset. The mindset of a failure.

The mindset that a failure is another Dead End. Most larger companies not fully committed to this process are stuck in a measurement activity which is based upon budget and ROI. This type of constant pressure creates the fear of failure. It solidifies the concept that any failure equals a Dead End. The process described in “The Lean StartUp” may not be for everyone or every company. However, the mindset of removing the concept of Dead Ends is within the reach of every person and every company.

There is always another way, a lesson learned, a work around, a new starting point, different ingredients, some other way to look at something, obtain more feedback, ask another audience, and more.

Would you be interested in an initial consultation with Mitch Tublin to see if this is right for you – your team – your company? CLICK HERE!

Mitch Tublin runs a boutique consulting company with clients all over the world. The goal is to bring out the best in people – teams – and organizations.

Let’s settle this now! Or at the very least … END_OF_DOCUMENT_TOKEN_TO_BE_REPLACED

Enjoy your family and friends. Be grateful, … END_OF_DOCUMENT_TOKEN_TO_BE_REPLACED

Is your business ready to lose loyal … END_OF_DOCUMENT_TOKEN_TO_BE_REPLACED