It seems to me that more and more people argue. 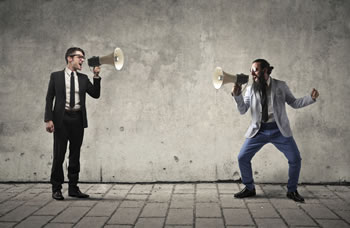 How about you? In fact do you even know or recognize the difference between the two?

the act or process of arguing, reasoning, or discussing
a coherent series of reasons, statements, or facts intended to support or establish a point of view
an angry quarrel or disagreement

For certain, the number one subject area in the USA where people are prone to argue is politics.

One side vs. the other and each have their ‘facts’ to support their opinion. Politics aside people argue more and more about everything and anything. Next to politics would be sports.

People have been severely injured in the parking lot outside of the L.A. Dodgers stadium for wearing the jersey of the opposing team. It may be because everyone has access to post their video online and say whatever they want whenever they want to, and they go relatively unopposed.

If we take a look at these two areas consider the role models we have in each area.

The more ridiculous a politician acts or speaks out in an unordinary way the more we see them shouting out whatever message they have.

There was a time when elected officials recognized on all political sides that once they were elected there was a job to do other than get on a broadcast or conduct another interview.

If we take a look at sports in baseball we see a Manager or Team Coach go out to the Home Plate Umpire and scream at them nose to nose or even kick up dirt on them after a perceived bad call.

“Keep cool, anger is not an argument.” – Daniel Webster

These are the examples we watch in real life – the politician and the sports figure. Both behaving poorly and at the same time planting a seed in us at an early age of how we are supposed to act.

In recent years NASCAR Drivers are getting in the act as well.

Now pretty much at any race where one of the drivers feels another driver ‘took them out of contention or even the race’ you can see the two drivers physically attacking each other right out on the track.

“Say what you mean, but don’t say it mean.”
“Don’t raise your voice, improve your argument.” – Desmond Tuto
[Address at the Nelson Mandela Foundation in Houghton, Johannesburg, South Africa, 23 November 2004]

Mitch Tublin is the CEO and Founder of Wenkroy International LLC a boutique consulting company with a main focus on Strategic Business Consulting, Training and Business Coaching. Our passion is to take people to the next level in their life and in their business.  Are you interested in having Mitch speak at your company or event – click here?

If you took some time to relax between … END_OF_DOCUMENT_TOKEN_TO_BE_REPLACED

When you have a specific project to complete – do … END_OF_DOCUMENT_TOKEN_TO_BE_REPLACED